A fourth impersonator has been arrested by Fiji Police with the assistance of the Fiji Revenue & Customs Service (FRCS) this afternoon.

Navin Chaudhary, an ex-convict from Namadi Heights impersonated a Revenue & Customs Officer and tried to swindle a business for financial gains.

“The impersonator called Fiji Minimart this afternoon and told the company that they were going to be audited by Revenue & Customs. The impersonator further advised the staff that the audit can be cancelled if they pay him cash,” FRCS Chief Executive Officer, Mr. Visvanath Das said.

“I am glad that the targeted company called our officers and in collaboration with Fiji Police, we framed the impersonator in Caubati today,” Mr. Das said.

“We are calling for the public to take heed of individuals who are impersonating Revenue & Customs Service Officers, for the purpose of personal financial gain,” Mr. Das said.

“The previous impersonators appeared in court last week and are now in police custody,” he said.

“Impersonating a Revenue & Customs Officer is an offence under the Crimes Act 2009 with a maximum penalty of 3 years imprisonment,” he said.

“Once again I acknowledge the partnership with the Police Commissioner’s Special Taskforce and the vigilant taxpayers who formally registered their complaints that has led to the capture of this fourth impersonator who is currently in Police custody,” he said.

Customs officer. The public can also demand a Revenue & Customs officer to present his/her staff ID card or warrant card during an inspection and investigation,” he stressed.

“We also urge the public to frame such impersonators to deter cases,” he added. 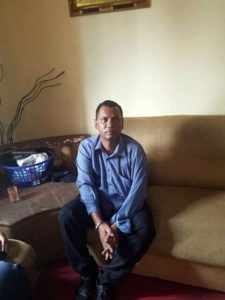 Get Our Latest News & Events right to your inbox